What is a Stochastic Process

Wikipedia defines a stochastic process as a mathematical object that is defined by a family of random variables.

A better way to look at it would be

It is a collection of random “events”, each happening with either fixed or varying probabilities, over a given time

where events can be a single experiment or a cluster of them, for example: Tossing a coin is an event, as we will have a measurable outcome out of the same.

In this particular implementation, we will try and understand this simple stochastic process or Random walk and in the next one, we will see how they are used to model things like stock movements, particle behavior in solutions, etc.

Let’s take into consideration the mathematics of a simple experiment, the rules of the experiment are as follows:

There are two players, one X, and the other Y

Now since we know that the “events” are simple fair coin tosses, we can easily deduce that the probability of each event to be heads or tails is

We also know that this process is done over a certain period of time, let us take the time to be presented by variable t.

At any given time after starting initially at zero, we will be in any one of the three states:

Now at any given time t, we will be in either one of these stages, represented by the part f(t - 1 ) meaning all the events that have happened until the previous time step, now although our state depends on the previous states(meaning if we are above or below 0), what happens at time t within the event is independent. (The coin toss is still fair with probability ½ ).

Simulating the same with python

The same is understood better by this simple simulation of this process where we present the earnings/losses of x when playing this particular game. 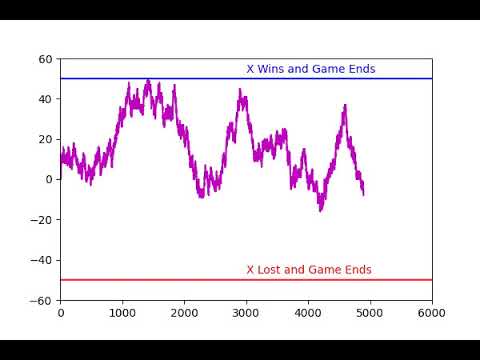 Now doesn’t this thing looks like something? for those of you who follow, these moves exactly look similar to a stock, so can we use stochastic process to map the outcome of stocks? Well, stay tuned to look for answers in the next one in this series.

The code to get the simulation running is accessible here

**The title image is from coursera